“When Eileen Holt stepped into Vancouver’s dizzying housing market, she never imagined she would come out with a half duplex.

A business-development manager for an engineering consulting firm and a recent empty nester, Ms. Holt had spent two decades in a large suburban home and was looking for a detached house with a suite that she could rent out in Vancouver’s red-hot Commercial Drive area.

But as prices skyrocketed, she was left contemplating fixer-uppers that required major repairs – and found herself at the losing end of several bidding wars. “Anything that was in the $800,000 range was going for $1.2-million or more,” she says, adding that there were often 10 or more buyers vying for the properties, most of which sold in a single weekend. “One of them went for $1.6-million.”

The only bidding war she won came with an inspection report so damning that she walked away.

So when her agent sent her a listing for a 1,200-square-foot Three-bedroom, three bath property that was in nearly new condition, in a perfect location and within her price range, she jumped at the chance. The difference? It was a half duplex.

“I’m thrilled. The space is actually bigger than the house that had the accepted offer, it’s newer, I have no strata fees and I have a lovely kitchen,” Ms. Holt says. A small garden and a mountain view were also big selling points. “Everything is new, fresh and clean, and I don’t have to be in repair mode from the very beginning.”

Ms. Holt is not alone. In fact, as legions of Vancouver buyers get priced out of the detached-home market, more and more are turning to half duplexes and larger townhouses, which boast many of the same features, but at a significantly lower cost.

“Because of the rapid appreciation of detached-home prices, there’s pressure on the next best thing, which is a duplex,” says Real Estate Board of Vancouver president Darcy McLeod, who says the trend is happening across Vancouver but especially in East Vancouver, where zoning allows for more duplexes to be built. “They get a little bit of a land, a reasonable sized home, and in a neighbourhood they want to be.”

That increasing demand, ironically, is pushing prices up at a pace usually reserved for single-family homes – and triggering bidding wars. According to Mr. McLeod, in the last quarter of 2014, the average sold price for an East Vancouver half duplex was $786,816; one year later at the end of 2015 it was an astonishing $961,460. Now most three-bedrooms are selling for $1-million or more.

On the West Side, prices range from roughly $1.2-million to $2-million, a sizable leap from prices even one year previous.

The demand for larger townhomes is also rapidly ramping up. Revard Dufresne and his wife purchased a 1,500-square-foot, three-bedroom townhouse on Victoria Drive near East 19th for $735,000 in 2013; less than three years later, they put it up for sale at $988,000. The demand was so great that potential buyers were making cash offers even before the first open house; after a bidding war a few days later, it sold for $1.1-million.

“I couldn’t believe the demand. I follow real estate but I still couldn’t wrap my mind around how many calls our agent got,” says Mr. Dufresne, who bought a large detached house outside Vancouver where he and his wife plan to raise their kids. “And when it went for $112,000 over asking, it totally floored us. We were jumping around like we had won the lottery.”

Agents Ruth Chuang and Corey Martin of popular East Vancouver real estate company Ruth & David say that a growing number of buyers are choosing half duplexes – not only because of the more manageable prices, but because they tend to be newer and more efficiently laid out; and, unlike older fixer uppers, have more bathrooms and come with storage and a garage. What’s more, expenses such as property taxes and maintenance costs are shared between co-owners – without having to fork over hefty strata fees…” 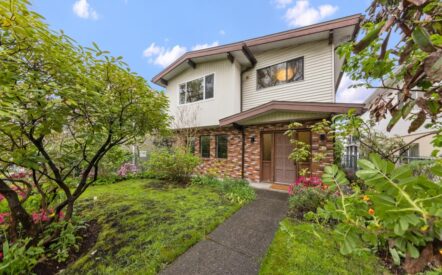 Perched up on one of The Drive’s best tree-lined streets is this fabulous & functional family home. Upstairs has a classic Van Special layout with... Read More >

Charming RT-5 3-level old timer on a 33x122ft lot in the heart of Grandview Woodland! The cute porch welcomes you into this distinctly East Van... Read More >